Why are people still dying from Legionnaires’ disease?

In the nearly 50 years since epidemiologists first discovered Legionnaires’ disease, we have learned how to test for it, treat it and prevent it. So why are people still dying from it and why are more and more people becoming sick with it every single year?

Most recently, one woman died and over 70 other people were infected in the largest outbreak of the disease in Georgia history after staying at the Sheraton Atlanta Hotel in mid-July. From 2000 through 2017, the number of reports of Legionnaires’ disease increased over 500% in the United States. Many factors contribute to this increase: a true increase in cases, an older population at higher risk, better diagnosis, improved disease reporting and more thorough investigation of outbreaks by health departments. However, the fact remains that each year over 6,000 people are infected and over 250 people die from a disease that is largely preventable.

What is Legionnaires’ disease?

Legionnaires’ disease is a respiratory disease that occurs when the bacteria Legionella pneumophila infect the lungs. In order to become sick, you have to inhale microscopic droplets of water that are contaminated with the bacteria. Simply drinking contaminated water is not enough to make you sick, and you cannot catch the disease from someone else who is sick. It can take up to 10 days for symptoms to appear, and when they do, they initially look like a bad case of flu. The illness typically begins with a high fever, a cough, shortness of breath, muscle ache and headache. After a couple of days, these symptoms progress to pneumonia, a buildup of fluid in the lungs that makes it difficult to breathe. In 2014 and 2015, more than 95% of people with Legionnaires’ disease wound up being hospitalized. While the disease is treatable with antibiotics, about 1 in 8 still died from their infection.

Although the bacteria can infect people of all ages, more than 80% of reported cases were 50 years old or older and about 60% were men. Smokers and people with underlying lung diseases – such as emphysema or chronic obstructive pulmonary disease – or weakened immune systems, due to medicines or health problems such as cancer or diabetes, are also at higher risk of infection. 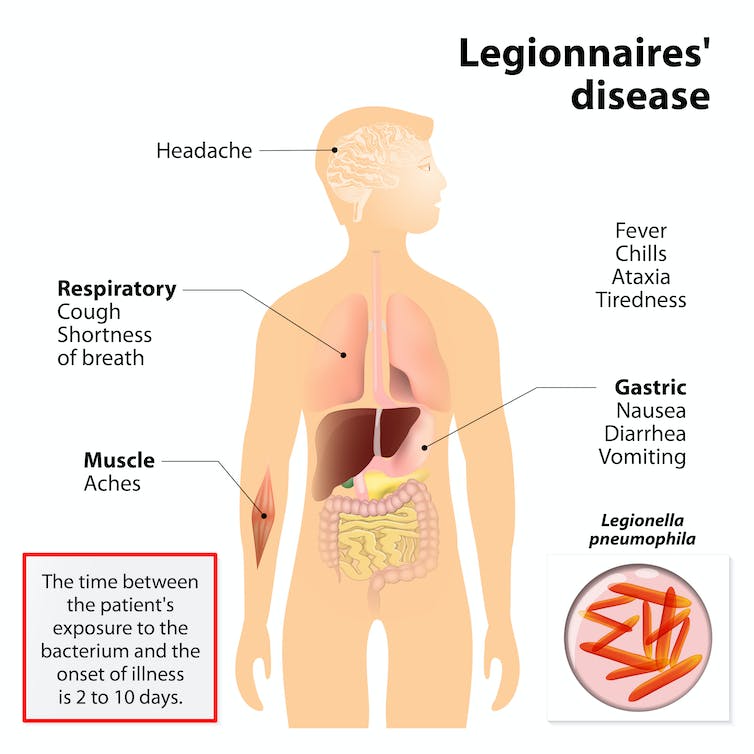 How does it spread?

We have learned a lot about the disease and how it spreads since it was discovered and named nearly 50 years ago. In 1976, an estimated 180 attendees of American Legion convention in Philadelphia developed a mysterious respiratory illness and 29 died within days of the event. It wasn’t until months after that outbreak that the responsible organism, Legionella pneumophila was first discovered. The bacteria was found growing in the hotel’s cooling tower and was spread throughout the hotel via the air conditioning system. We now know that Legionella pneumophila can be regularly found in fresh water all over the world, which makes preventing disease a particular challenge. We also know that man-made water systems, including hot tubs, cooling towers, misters, fountains, hot water tanks, and even the complex plumbing systems in big buildings can grow and spread Legionella.

Two things have to happen for a person to develop Legionnaires’ disease. First, a person has to be exposed to the bacteria through inhaling small droplets of water. Then the bacteria has to multiply until there are enough of them to cause disease. The first factor is impossible to control, as exposure occurs through breathing contaminated water. For example, if you take a shower, there is no way to prevent breathing in the fine mist created by the shower head. 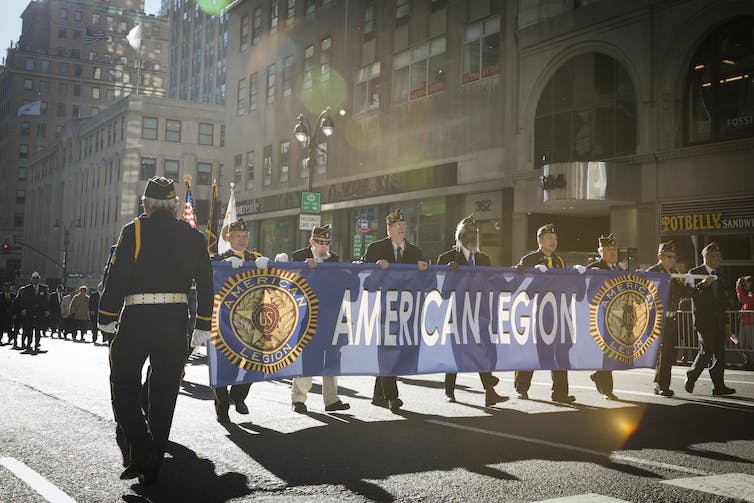 Because these bacteria are found everywhere in fresh water, it is impossible to keep them from being introduced into a water system. That leaves society with the challenge of controlling the number of bacteria. The bacteria can live a long time in the pipes that are part of a larger water system, such as those that are in hotels and nursing homes, and when a person turns on the shower in a hotel, Legionella comes tumbling out, too.

The most important factor in preventing Legionella growth in pipes and the water system is to control the temperature of the water. These bacteria grows best at temperatures between 77 and 108 degrees Fahrenheit. The longer water sits in pipes, such as those in a hotel room that is unoccupied for several days, the more likely it is that it will be in that temperature danger zone and the bacteria will flourish. This is why Legionnaires’ disease cases spike in the summer and early autumn when it is harder to keep the water out of that temperature danger zone.

Ultimately, the responsibility for preventing Legionnaires’ disease falls on the shoulders of the building owners and managers to implement a comprehensive water management programme of the complex water systems in their facility. Unlike private homes, commercial buildings have miles of pipe where water may sit for long periods of time, water-based cooling systems, large spas and decorative fountains – and these all have to be properly maintained to prevent Legionella growth. This is particularly important for hospitals and nursing homes, as 20% of Legionnaires’ cases are acquired in health care settings by people who are at high risk for infection. However, as we have seen in the outbreak in Atlanta, and in hundreds of other outbreaks over the years, Legionnaires’ disease can affect anyone at any time.

As we start to understand what went wrong in Atlanta, public health experts might learn more about how to prevent Legionnaires’ disease. It’s then up to building owners and operators to put the necessary protections in place throughout the country. Unfortunately the public can’t do much more than hold their breath.

What is Occupational Hygiene?